Sisters, Photo Shoot, and Another Round for Everyone

Sisters, Photo Shoot, and Another Round for Everyone

Yara messages me one day.

That was out of nowhere I say to myself, but I check out her sister's Instagram. What I see surprises me.

"I have a theory," I tell her.
"Yeah? What's that?"
"All women from Ukraine are beautiful. I may have to move there one day."
"Haha! It's nice there. We are usually very family oriented and good cooks (except for me), so you'll love it there."

They arrive at my home on time, and I help them bring their belongings upstairs. I kindly ask Alexa to play some music, and I introduce myself to her sister.

"I'm Ricardo, and it's great to have you here. What's your name?"
"I'm Sofia, and thank you for having us here," with a noticeable smile and a particular accent.
"Ahh, Sofia. Like the capital of Bulgaria?"
"Yes, do you know the area?"
"No, I just used to know someone from Bulgaria, that's all."

They notice Blu's hamster and ask about it.

And she opens the cage and reaches her hand inside!

"She bites, don't say I didn't warn you."
"They all bite because they are just trying to defend themselves, once hamsters realize you are not a threat, they won't bite anymore." 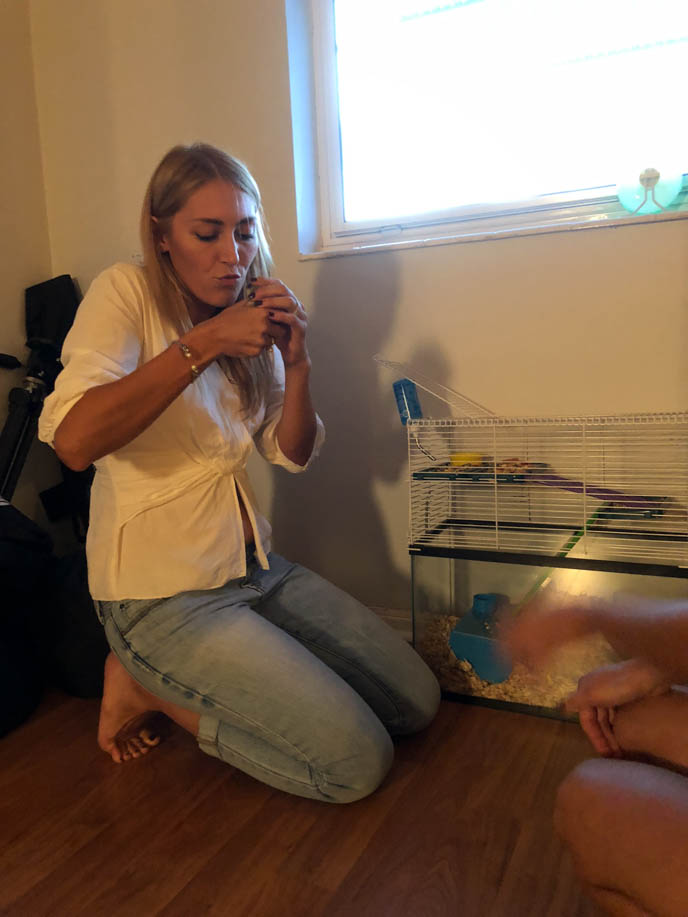 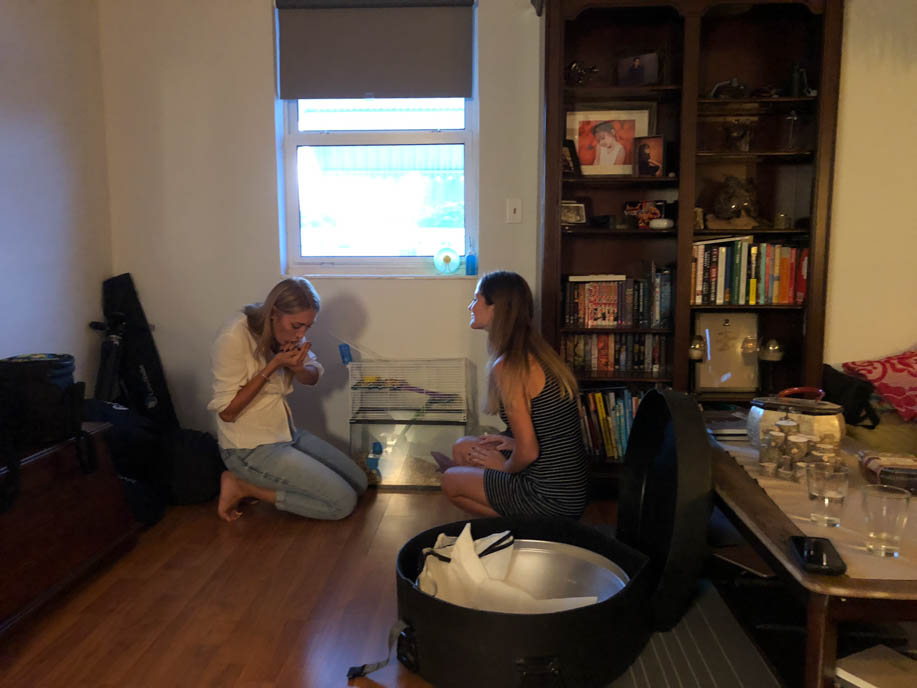 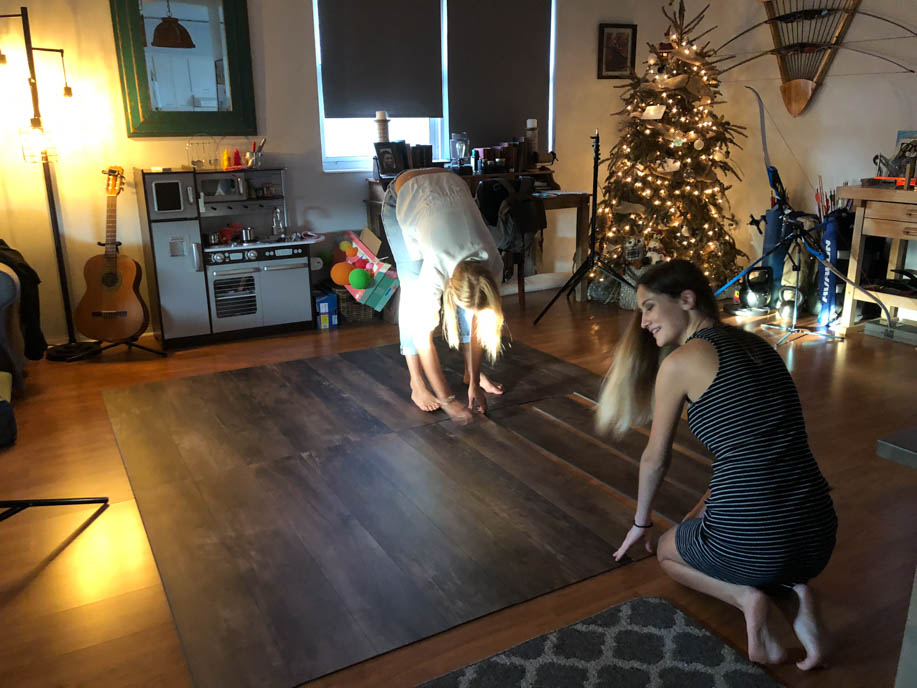 I tell the sisters to make themselves at home as I begin to set up the flooring I purchased at Home Depot specifically for this shoot. They walk around, looking at the things that make my home, home. After a bit, they insist on helping, despite my protest. That's when I learned: Ukrainian women are stubborn, in a good way.

We unroll the backdrop that I painted a few weeks ago and tell them how I originally bought one on Amazon.com, but it was terrible. I mention how I offered artists $350 online to make one for me, how that fell through, and how finally I decided to do it myself.

"You painted this?"
"Yes."
"And you have no experience painting?"
"Nope. YouTube helped though."
"Wow."
"Thanks," I reply with a slight sense of embarrassment for some reason.

Once we were done setting up, they begin changing into the many different outfits that were brought. I could not help but notice how fashionable these sisters are. We begin shooting. 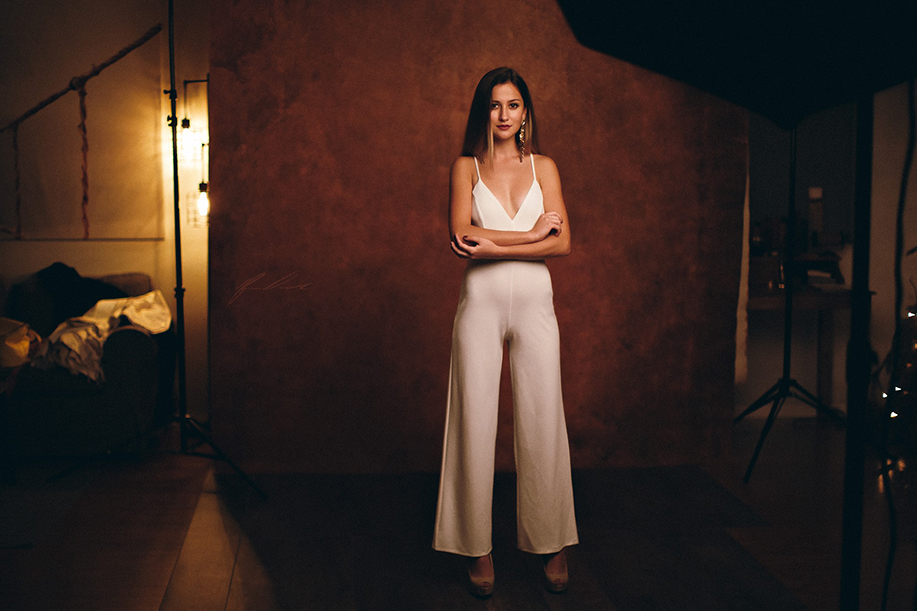 I'm making changes on my camera, as Sofia walks unto the set. When I was done making the changes I wanted, I look up and see this.

She tried hard not to smile, but she eventually got it. I look down at the camera, and go, "Woah!!"

Sofia starts laughing, and says, "I love how excited you get!", in her Ukrainian accent.

"And I love that Ukrainian accent. Keep talking."

"No, I have a bad accent," she responds.

I lift my camera again, and we continue shooting.

She is always smiling, so it is a challenge for her to keep a straight face. She also accuses me of being a contributing factor, so I tried to keep a more serious demeanor. It works. And we continue shooting as I begin to love the portraits we start to take. 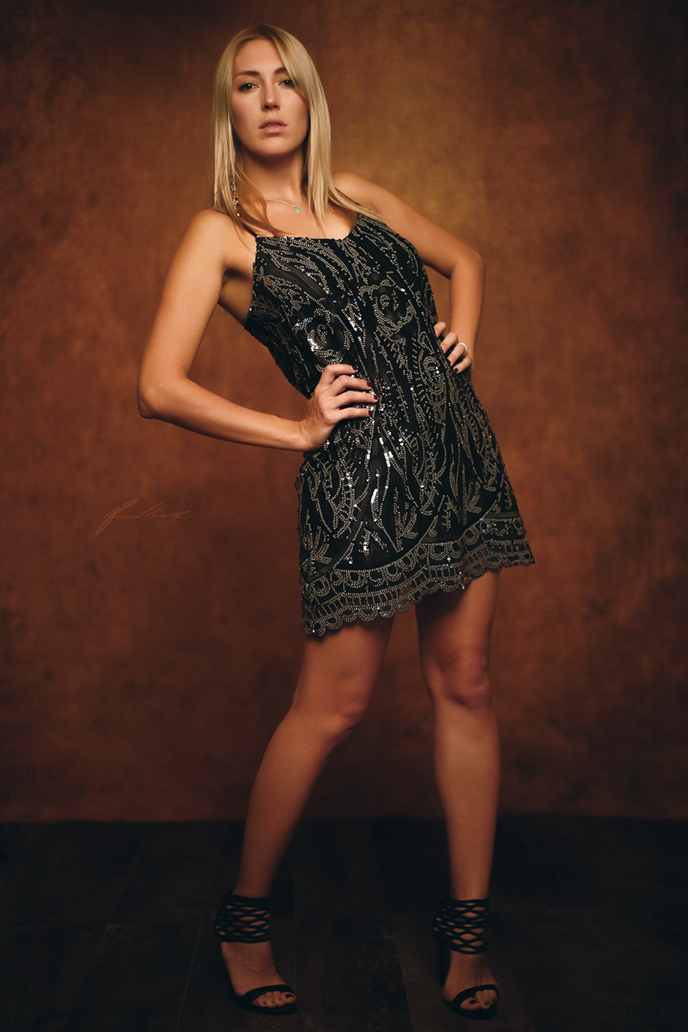 I was impressed by Sofia's ability to take such strong portraits, and her sister equally impressed me. The color contrasts between the sisters' skin and the tone of the backdrop were nothing but excellent. I see myself getting closer and closer to the ultimate vision I have with hand-painted backdrops with each test shoot I do. 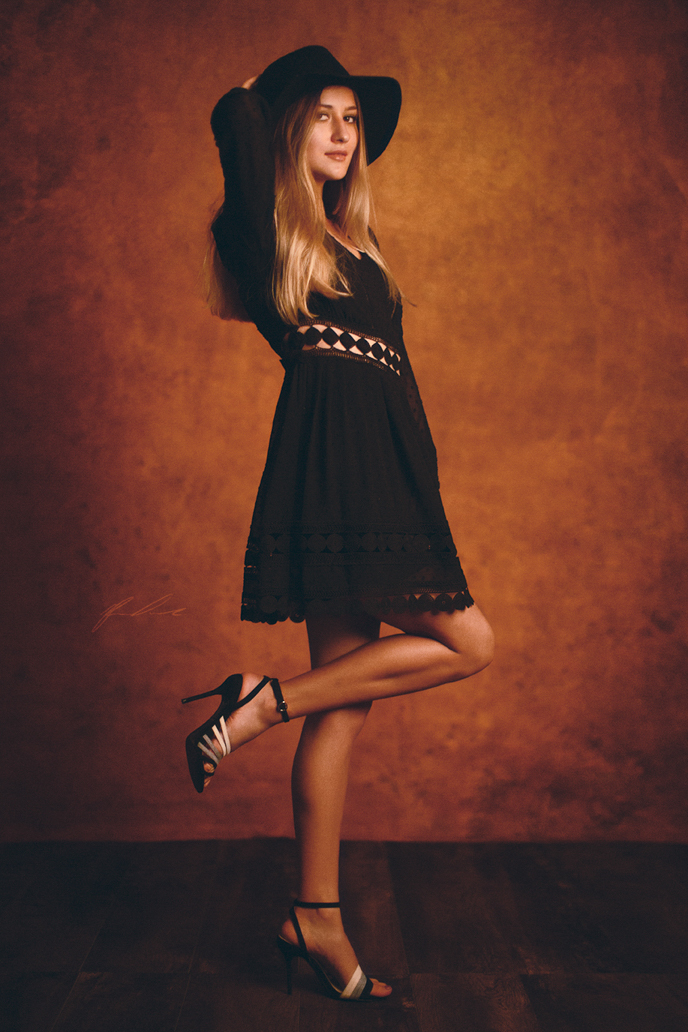 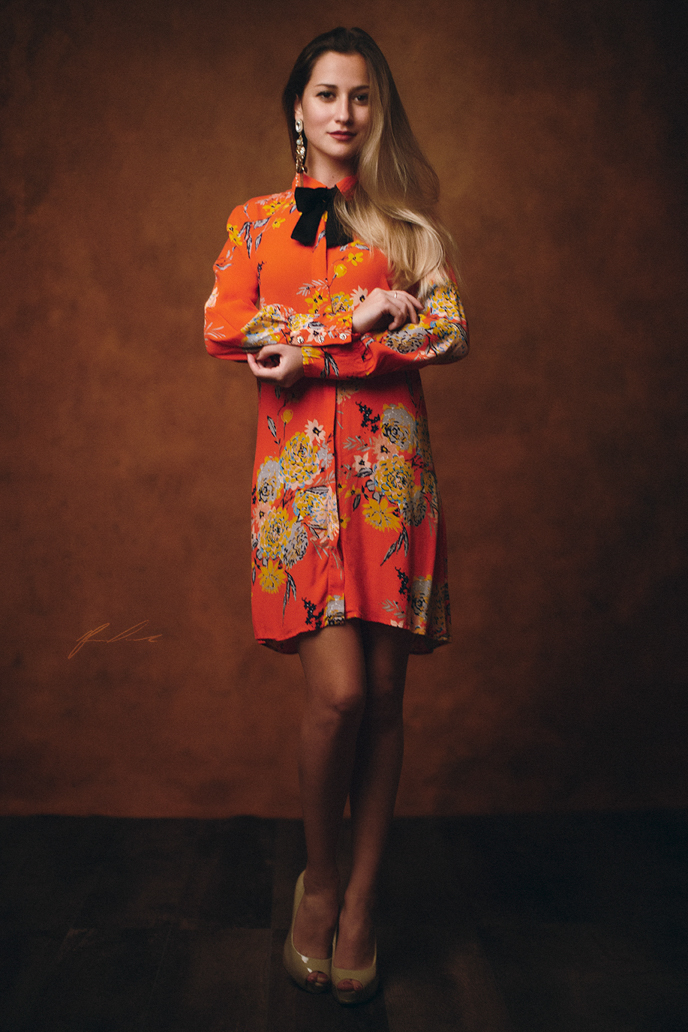 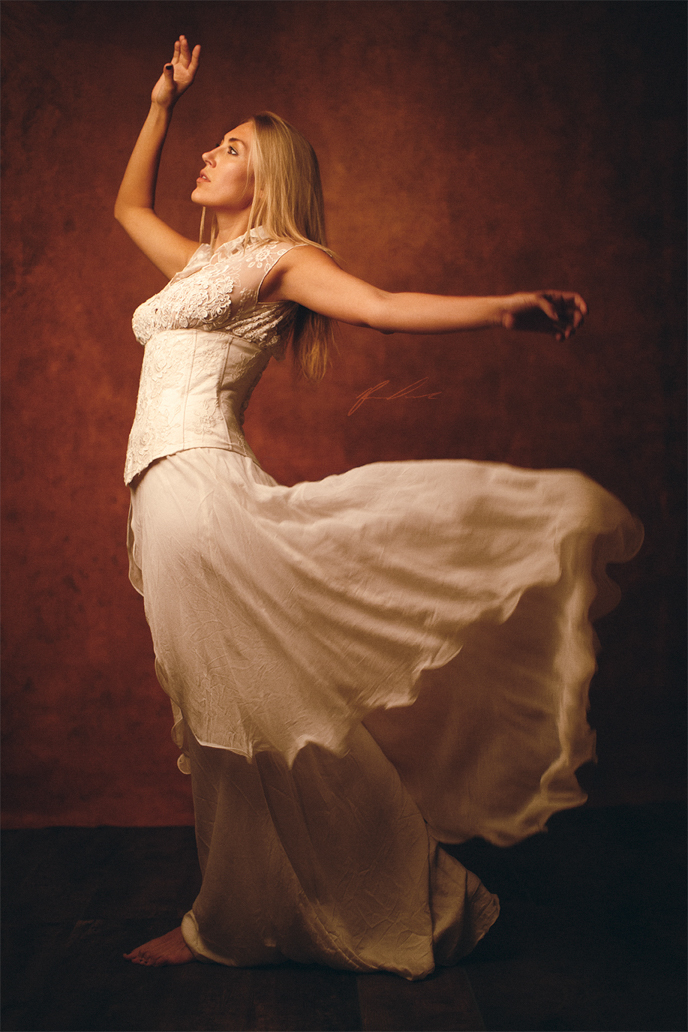 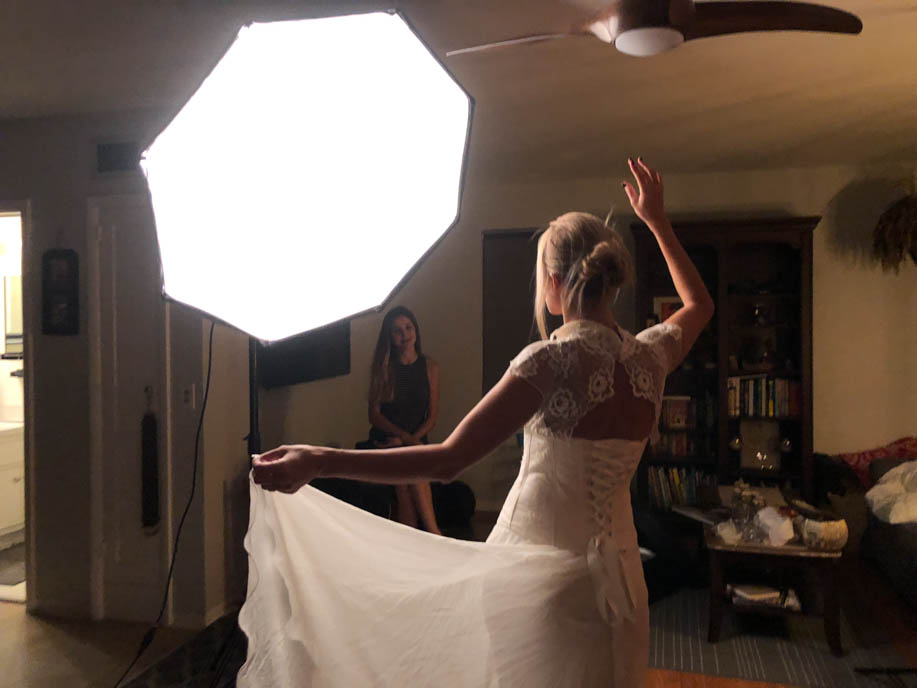 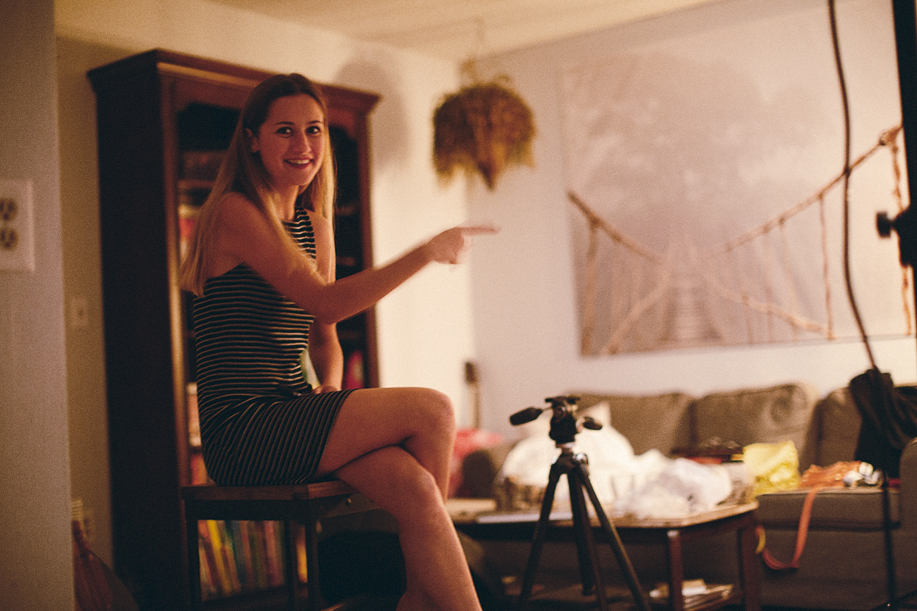 Another Round for Everyone!

We wrap up the shoot late, noticing that none of us ate dinner, I invite the sisters to dinner. Somewhere local.

They say something to each other in Ukrainian, and decline while shaking their heads no towards me.

"You were so amazing today, let us invite you instead!"
"Umm, no it's OK!"

Next thing I know, we are driving to South Beach. I help them carry their belongings to their place. They show me around the apartment, and I am offered a drink while they get ready. I can't help but look around, this... Eastern European feel inside this apartment. It's nice.

We walk towards Espanola Way and make our way to an Italian restaurant. On our way there, Yara is greeted by so many people! It seems like if she knows everyone, people saying hi to her, giving her hugs and kisses on the cheek. Her sister and I joke that she's the mayor of Espanola Way!

"I used to work here, so I know everyone," she says.

It was pretty nice, seeing what I just saw. Yara has that charming personality, and she is just so kind and sweet. It felt nice to be in her presence, for she emitted so many positive vibes, it was insane.

We order drinks. Yara orders a coconut mojito, Sofia.... a sweet drink that's name I forgot, and I ordered Maker's whiskey (after the wine tasted bad).

"On the rocks?" asks the waiter.

"Only way to drink whiskey, my friend."

He comes back with my whiskey and a glass of ice.

"On the side, just in case," he says. I thanked him and the ice goes unused.

Soon after ordering our drinks, the waiter arrives with a champagne bottle and glasses.

"What's this?" Yara asks, with a smile on her face.
"Compliments of Mario!" says the waiter.

We all look at each other and just smile, thinking what a grand gesture it was.

"He's such a sweetheart," Yana says and proceeds to tell us the story of Mario. The introvert in me begins to wish I was more extroverted, because this vibe, this energy, is soo... how do I describe it... amazing?

We look at the menu, and we start ordering. The first thing that arrives are oysters! Funny thing about oysters is that... well... I never tried them before. It just feels weird looking at something slimy and just eating it. I make my confession to the sisters.

I look towards Sofia, who is already starting to prepare her first oyster for the night.

"Come on, eat up! It's an aphrodisiac!" laughs Yara.

The other entrees arrive, and soon after, two good friends of Yara arrive and join us. They just came from dinner from some fancy place (I forgot the name). They are visiting Miami Beach and are staying at The Delano. The two friends appeared madly in love. It was nice seeing how they interacted with each other.

"Boy, we LOVE The Delano, but ever since SBE bought Delano, it's just not the same anymore."

"Why don't you check out The Betsy? It's nearby," I slyly insert.

"The Betsy? We will have to check it out then!"

I loved the service at this place. When we were done, I offered to take the check. So did John, one of the two friends who came to say hi to Yara. Yara insisted that it would be on her, and that none of us will pay. John and I look at each other, and we then insisted we pay.

Impressive. I don't see that often these days. What a beautiful caring and giving person. 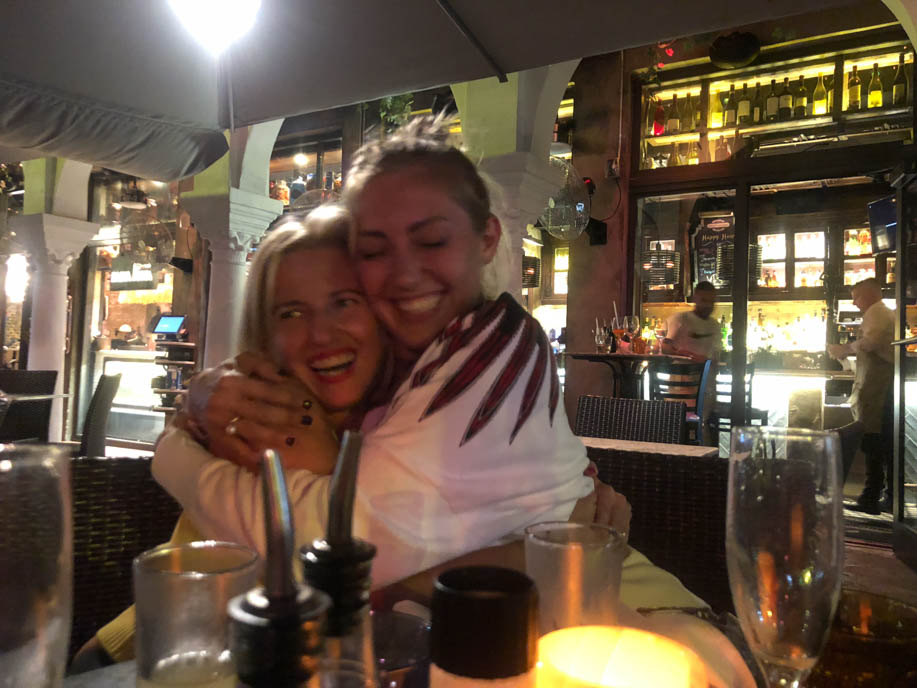 So an American, a Romanian, a Nicaraguan, and two Ukrainians walk into a Bar

So John says, "Guys, the night is young. Why don't we get drinks somewhere else? Faena? They have a great bar there. I'll order us an Uber!"

"I already ordered one," Yara responds, as she puts the phone away.

It was a weird feeling. Wanting to pay, or even contribute, but being denied and being insisted that the tab is already covered. I'll cover the bar tab at The Faena I decide.

We get to the Faena, and Yara tells Sofia and me that there is a woolly mammoth in the back part of the hotel, that we should check it out. So Sofia and I make our way to display. 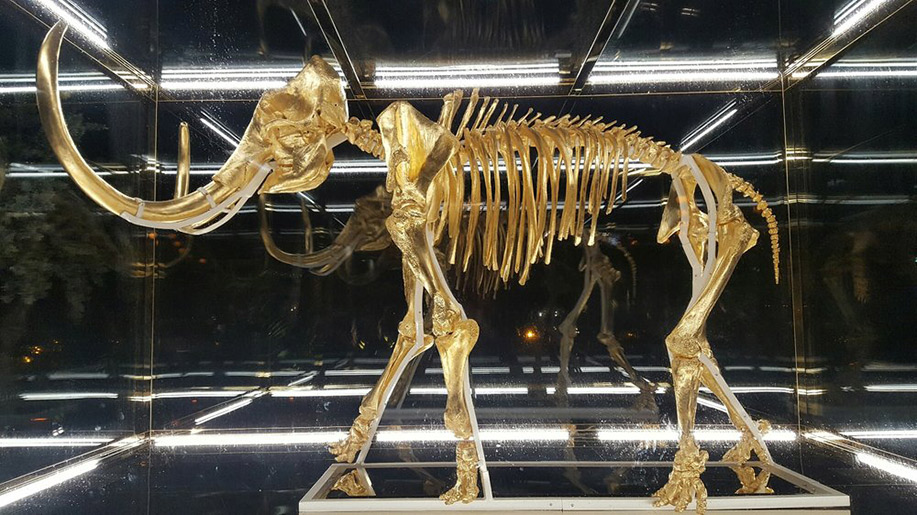 Soon after we meet with the rest of the group for another round of drinks. Whiskey again for me, and this time, Yara too orders whiskey. I'm impressed by her choice. Unfortunately, we were not able to stay long, because the bar was closing, so we only had time for one round of drinks. Again, John and I were outmatched and the tab was once again covered. Ugh! Grateful, but still! 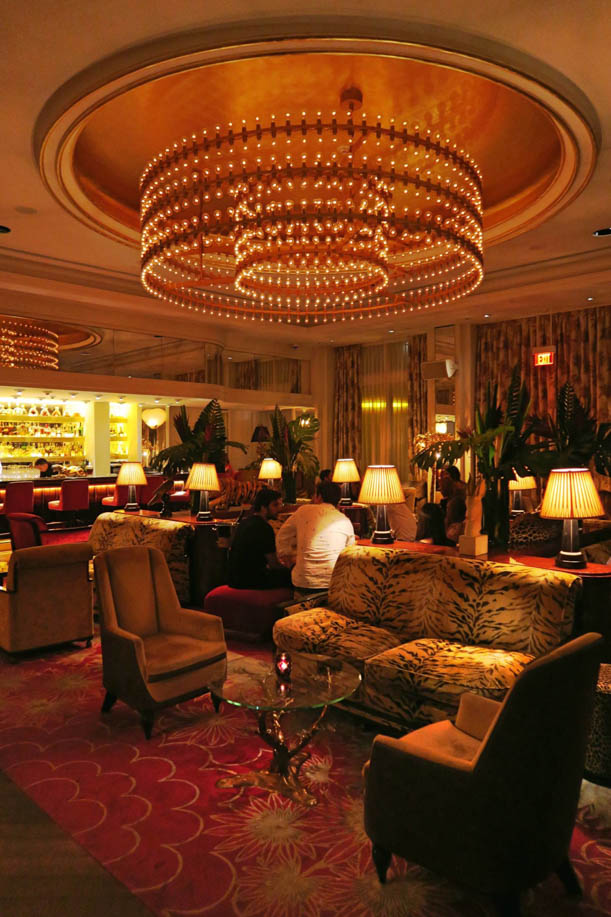 We walk towards the pool area of The Delano. I was the IT Director for Delano, and it's sister property for almost 6 years, and I never visited for drinks. Until now. When we get to the pool bar, both bartenders recognize me.

"Hey! What are you doing here!"

"Let's go in the pool!" says Sofia. I take another sip of my drink, curious to see where this leads.

Sofia starts to walk towards the pool. I take another sip of my drink.

Yara asks the bartenders, "Can we get some towels?"
"Yes, of course!"

I look towards Sofia, and her dress falls to her feet. Her body slightly illuminated by the nearby pool lights. Perfection.

I smile to myself. And in a reckless abandonment of who I usually am, I walk towards the pool, unbuttoning my shirt all the while.